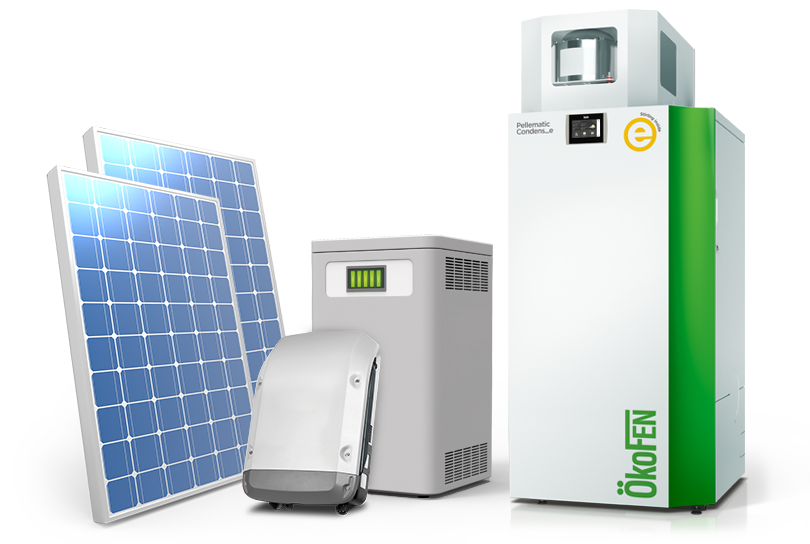 Generate electricity & heat from pellets & solar yourself all year round

Make your desire for independence a reality

myEnergy365 from ÖkoFEN is the answer to the question of how to generate electricity and heat independently and ecologically in your own home.

The holistic approach, which intelligently combines the latest technologies, opens up the unique opportunity for the first time to utilise totally ecological heat and self-generated electricity from pellets and the sun in a detached house. The concept is modularly structured. The innovation is offered as a complete system, although it can also be implemented step by step. An existing photovoltaic system can be integrated and the Stirling engine for electricity generation retrofitted at a later date.

This allows consumers to become gradually more independent in the manner best suited to their requirements and budget.

The core component of the power-producing pellet heating system is the Pellematic Condens, one of the most efficient pellet boilers with condensing technology.

Pioneering Condens condensing technology helps achieve an efficiency of 107.3%* combined with minimum emissions. Thanks to its compact design, the pellet boiler also fits into the smallest of boiler rooms and leads the way in terms of efficiency and space savings.

The pellet boiler can be equipped with a Stirling engine for electricity generation either straight away or at a later date. The Pellematic Condens is supplied with an eReady pack for the retrofitting option. Prepared interfaces on the controller and hydraulics enable subsequent installation of the Stirling engine, thereby providing the first step towards energy independence.

More about the Pellematic Condens

We are close at hand.

Find your local representative and contact them if you have any questions or concerns.

Do you have a question?

Then contact us with with your question or concern. We always endeavour to provide you with the best possible advice and information about our products.

Just give us a call.

Would you like a personal consultation or some information material? Or do you have a question about our products? Then give us a call. We look forward to hearing from you! 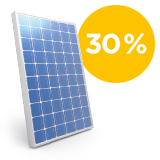 A PV system meets approximately 30% of the power requirements of a detached house.

The space required for installation amounts to approximately 35 m2 of roof surface. Existing PV systems can also be integrated. On sunny days, the unused electricity is fed into the public power grid.

The power storage unit makes an ideal addition to the PV system and enables around 70% self-sufficiency.

Storage of the solar power allows it to be used even after the sun has long since called it a day. The emergency power function also makes the system a blackout provision, because a Stirling engine can provide electricity in the event of mains failure. 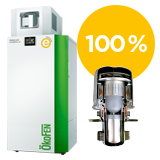 The Stirling engine is driven by the pellet boiler and also supplies alternating current (230 V, 50 Hz) on sunless days when little yield can be expected from the PV system. This is more frequently the case between October and March.

A Stirling engine enables the achievement of 100% self-sufficiency.

Would you like to know how the power-generating pellet boiler works? How the Stirling engine is driven? Then watch our explanatory video.

The operation of the Stirling engine depends on the weather and the production of the PV system. If a lot of sun is available, the heating system is supplied from the buffer storage and the PV system charges the battery.

In addition, the photovoltaic system stores your unrequired electricity production in the energy storage. On days without sun the Stirling engine runs and supplies the building with heat and electricity.

The core component of myEnergy365 is the Pellematic Condens_e, a pellet boiler that also generates electricity. In addition, the heating system is supplemented with a Stirling engine. In contrast to petrol and diesel engines, where combustion is internal, heat is supplied to the Stirling engine from the outside.

This engine filled with helium is located above the pellet combustion zone. The energy is produced by two different temperature zones that heat and cool the working gas. Expansion of the gas creates a pressure wave that moves a piston and generates electricity.

The Stirling engine is operated by the heat from the pellet boiler, with very little increase in pellet demand. This enables cost-effective electricity generation. A short response time makes the electrical output available very quickly. Another benefit is that the engine is maintenance-free.

This cycle is repeated 50 times per second, generating AC power at 50Hz.

Our mission is the realisation of an electricity-producing wood pellet-heating system.
So, what is so special about this concept? The answer is that OkoFEN is developing with the project series „ÖkoFEN_e“, CO2-neutral technologies with wood pellets as energy source, which can supply a building with both heat and electricity!
The most common and established type of combined heat and power production (CHP) is known as cogeneration, which is a system that has been studied extensively in the development of OkoFEN_e.

The principle of an Electricity Generating Heating

The overall goal of a electricity generating heating is to produce more efficient and more environmentally friendly electricity than with previously used technologies. The production of heat and electricity is made directly to consumers in their own building.

The power plant and boiler system (in the graph on the left) needs a greater energy input (135 kWh) to produce the same amount of heat (67,5 kWh) and power (22,5 kWh) as the electricity generating heating (CHP) plant on the right. In addition, the power station with almost 63% of losses is a huge consumer of energy, in which the heat that is produced during the generation of electricity (= rejected heat) is not required and is deliberately lost in the cooling systems. Only 37% of expendet primary energy is actually converted into electricity
In comparison, the boiler (in our example an oil boiler) achieves a better efficiency. The traditional system of power plant and boiler system for producing both electricity and heat has a total loss of 34%, whereas the electricity-generating heating system (CHP) uses the total heat of the system, resulting in a very small loss of only 10%.

In the other hand, the electricity generating heating (in the graph on the left) uses all of the heat of the system, achieving a very low loss of only about 10%. Of 100 kWh used, 90 kWh comes in the house.
This reduction in losses is achieved by using the produced heat for heating and the omission of electricity transportation.

In the case of ÖkoFEN, the electricity is obtained from wood pellets. The electricity generating pellet boiler with integrated Stirling engine is -under the project names „Pellematic Smart_e“ and „Pellematic e-max“- currently beeing developed for different power ranges and afterwords brought to market.

Microgen Engine Corporation has been working for many years on the development of a free-piston Stirling engine that is suitable for mass production. Since 1995, the enterprise has invested 200 million euros into the development of this concept; efforts that have been paid off with both technological and commercial success. As a result, the Microgen Engine Corporation has been the world's only successful mass producer of Stirling engines since 2010, when tey first became a commercial viability.

World-renowned companies, such as Vaillant and Viessmann also rely on the Microgen Stirling engine.

The Microgen Stirling engine produces alternating current (50 Hz) and provides 1 kW of electrical power; ideal for use in domestic homes.